In this release we did an upgrade in function of a better user experience in terms of budget export, participating in projects and changing the context of a task.

Until now, budget exports could only be done at the plan level. Users who have to manage many plans in Husky were forced in this way to perform several budget exports one after the other, one per plan. We have now made it possible to do a budget export at the level of the entire account. This is visible from the main menu under BUDGET and the 'Export (xls)' button. The result is an Excel file with all budget data for all plans in the account.

An additional change is to unlink the column for the tags. Until now, all tags and tag groups were in one column. This caused problems when users wanted to do a filtering of the tags from the excel. Now each tag group gets a separate column.

In Husky it has long been possible to add different participants to channels and moments in addition to an administrator. On project level this was not yet possible, there you could only assign a project owner. For users with many projects it was therefore difficult to quickly filter 'their' projects. From now on it is possible to assign both a project owner and project participants to a project. The filter of the projects will then immediately show all owners and participants so that a precise filtering is possible. 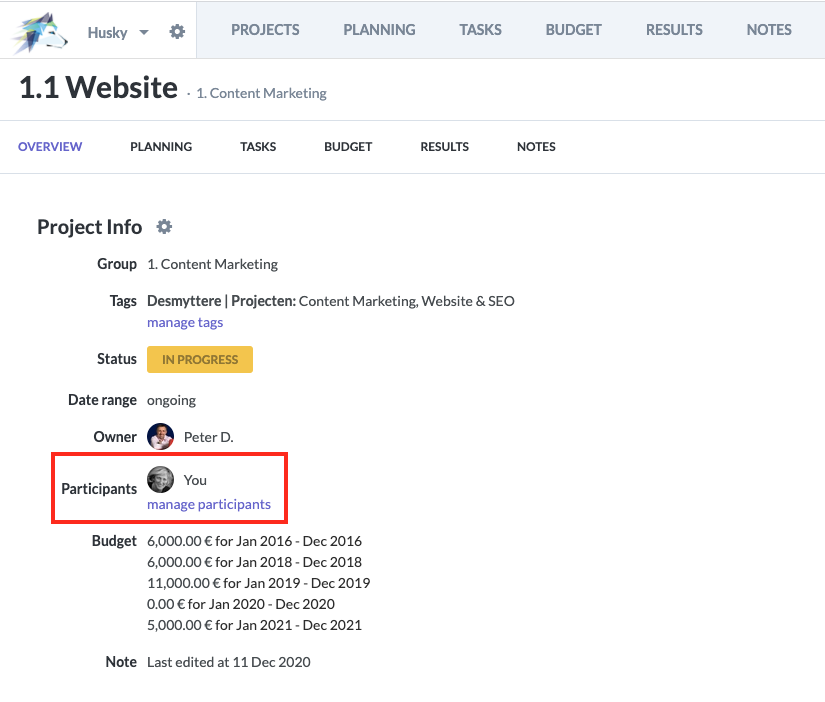 Changing the context of a task

Unique to Husky is the context feature, which represents the relationship between a task and a place in the schedule. Once that context was determined, until now it was difficult to change that context quickly and easily. Now in the side window, after clicking on a task, there is a new function 'Change context' next to the described context. In one popup you can assign the task to another planning item.